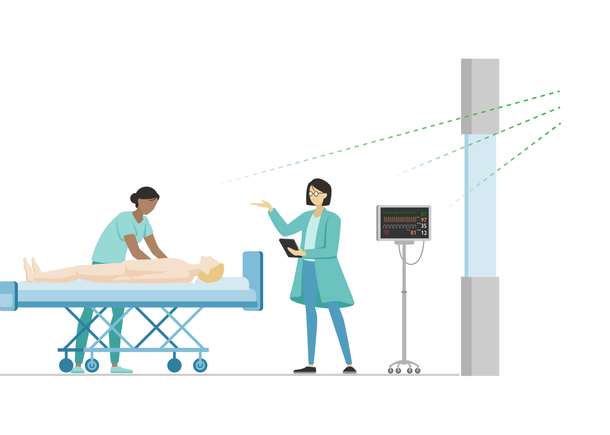 If you're involved in the operations of a busy simulation lab, you're likely interested in learning about ways to improve efficiency – not to mention freeing up more time to create meaningful learning opportunities for your students.

Here, we discuss four reasons why you should consider partnering with your IT department to set up a dedicated, online simulation network for your Laerdal devices. The results will bring you major improvements in the operational efficiency of your sim lab. And, they will maximize the effectiveness of your simulations.

1. Your simulations will be more stable.

To help convey how a dedicated network can improve stability, imagine you’re at a crowded party at a friend’s home. Multiple conversations on various topics are happening – but everybody at the party is mixed together in the same space. Everyone must talk louder, repeat themselves, and strain to hear each other, resulting in constant interruptions to the flow of the conversation. Inevitably, some information is misunderstood or lost. This situation is not efficient at all.

Seeing the problem, the host decides to split groups into different rooms by topic so that they can communicate without interruption. Problem solved.

Now, think about the data network in your organization. If multitudes of devices throughout different departments are sharing a network, the devices will have to compete for bandwidth and work harder to communicate with each other. It becomes similar to the party. And, unfortunately, devices can’t just speak louder. They get drowned out and/or interrupted by all the competition.

However, if your IT department serves as the “host” by separating groups of devices into different sections of the network, similar to the analogy of putting people in different rooms by topic, the result will be more efficient management of the organization’s overall traffic. Having one of these dedicated sections of the network exclusively for your Laerdal equipment will result in a more stable connection that will lead to fewer drops and lags.

In addition to the benefits of fewer headaches and the time consumed by network issues that a stable connection will provide, consider the possible impact of connectivity problems on your learners. If a scenario gets interrupted due to a connectivity issue, it will inevitably cause a reduction in the scenario’s realism. This could potentially affect the participants’ engagement levels.1 You put a lot of effort into maximizing your students’ engagement levels, from designing an effective pre-briefing to planning every detail of your scenarios. Would you want something as straightforward as a network issue mid-scenario to undo the work you’ve done?

2. Software updates will be faster and easier.

We know that software updates are important for keeping the devices we rely on in our daily lives functionally optimal. Think about smartphones. Thankfully, because our phones always have access to the Internet via Wi-Fi or our data plans, we rarely give software updates much thought. Checking for and downloading updates are usually as easy as tapping a few buttons – and in many cases, our phones notify us when a software update is available.

Now, consider software updates for your simulation devices. If you’re currently using routers for your Laerdal equipment, you may struggle to find the time to routinely disconnect your devices from your routers and then connect them to the Internet to check for and download available software updates. When your equipment is set up on a dedicated online network, it’ll always be connected to the Internet – which means you’ll have quicker, more seamless access to bug fixes and new features as soon as they’re available.

Throughout COVID-19, many organizations relied on remote IT support software to continue supporting their employees who were working from home. This software allows them to access employees’ devices remotely to identify and fix issues without the need to depend on the employee for any technical know-how.

A dedicated online network will allow for the same benefit for your Laerdal equipment. When you call in for support, our Help Desk technicians can troubleshoot your simulator remotely to help determine the seriousness of the problem and begin solving most issues. Remote support means you can spend less time fixing problems, and more time focusing on your training.

4. You may be able to perform in situ simulations throughout your facility.

In situ simulation, or simulation that takes place in the actual clinical environment, allows students’ simulation experience to be as close to reality as possible. In situ simulation has been shown to improve clinical and teamwork skills, and even improve patient safety outcomes.2

A dedicated network can be created for accessibility throughout your facility. This means you’ll have flexibility in choosing locations for your simulations. And, you won’t need to worry about staying within range of a router.

Bonus Tip! How to Get Your IT Team on Board

If you’re ready to start improving your lab’s operations with a dedicated, IT-managed online network, you’ll need the support of your IT department to help implement it. To help you get buy-in from IT, here are some reasons that a dedicated network will benefit them:

Thanks to these benefits, IT will likely see a decrease in support request emails, calls, and tickets related to connectivity issues from your lab – freeing up more of their time and resources!

If you believe that a dedicated network is what you need to improve your performance, please reach out to our Network Implementation Project Coordinators at [email protected]. They can work through the process together with your IT team.